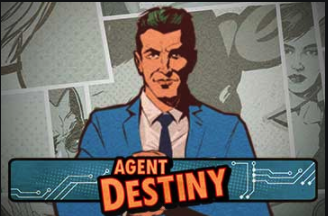 The game is a bit of a departure from the norm for Play n Go which is welcome. They rarely release a bad game and they often release belters but to be fair the best performers aren’t exactly original.

No problem with originality here (within reason of course, it does draw on Agent Jane Blonde, Archer, Jack Hammer and a host of other references). They brought us Wild Rails we can forgive them.

The action takes place on a 5×3 reel setup with 20 paylines.

The top single win is 5000x stake so there’s something to aim for and it’s fun enough to not need the ridiculous 25000x and the like wins that we’re increasingly seeing in new releases.

It is High Volatility mind you, a trend that seemed to be abating for a while but has come back strongly.

We don’t always want to go shit or bust you know providers, you can make great games that will excite us without throwing us into a state of panic.

There are two Wild symbols in Agent Destiny.

The first Wild has no additional modifiers and simply turns the position in which it lands wild.

The second Wild is a bit more exciting. It also acts as a Scatter and can trigger the Linked Reels feature.

Linked Reels are generally triggered randomly (you’ve seen these before of course…) in this case up to 3 reels can turn completely wild or match.

Colossal symbols. There are colossal/mega symbols in the game which are randomly triggered. They’re worth keeping yourt fingers crossed for as they only become high value or wild symbols.

Free Spins are triggered by landing scatters on reels 1, 3 and 5.

You are rewarded with 9 free spins and the Linked Reels and Colossal symbols are active. Linked Reels will trigger on every spin moving from right to left with each spin.

During free spins every scatter that appears on the reels will award one additional spin.

It’s nice to see Play n Go release something that’s a little less stern graphically. This is a well-crafted slot with nice flow to it and a good feature with the Linked Reels and random modifiers.

It’s not going to overtake their big hitters but it’s a solid release for sure.