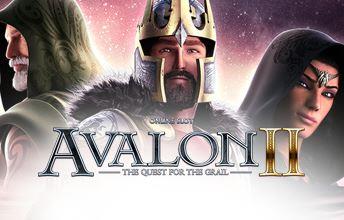 The Avalon 2 slot game is really in-depth and has a variety of entertaining features. It may take you some time to experience them all but it’s worth the effort.

There are a staggering 8 bonus games in Avalon 2 and you must choose your path wisely.

Merlin Feature may also trigger at the same time as the Bonus feature.

The Expanding Wild Appears in Base Game on Reel 3. Itwill substitute for all symbols except the Scatter and if a Scatter lands behind the Expanding Wild, it will still pay.

Avalon 2 Lake of Legend Bonus Rules • This is a Dice Roll Bonus game.

The aim of this Bonus is to try to complete Excalibur by reforging the Sword fragments. Rolling the Dice, may reveal a number which associates to a Sword fragment number.

After each Dice roll, if there’s a match, the Sword fragment with the matching Dice number moves into the Reforge Display.The player is paid out a multiplier equivalent to the number on the Dice (6x, 5x, 4x, 3x, 2x, 1x). That is, if the Player rolls a 2 on the Dice, the Sword fragment labelled 2 must add to the Reforge Display and the Player receives a pay-out of 2x their total bet.

If the player rolls a number on the Dice and the associated Sword fragment has already been added to the display, the player is still awarded the multiplier number for that roll even though no Sword piece moves.

If the player reforges Excalibur, they receive a pay-out of 15x their total bet on top of previous wins and 6x their total bet for any of the remaining dice rolls. The Prize Value is multiplied by the total bet placed.

This is a Choose Your Wild Feature.

The Player will be awarded 15 Free Spins at a 1x multiplier. Players may not re-trigger Free Spins or trigger the Bonus during this Free Spins Feature. At the start of the Free Spins feature players are presented with a selection of High symbols.

The chosen High symbol has a 2x wild multiplier. The selected Wild symbol has an altered appearance for quick identification on the Reel set. The Base Game Wild symbol must also apply in this Free Spin Bonus Game. 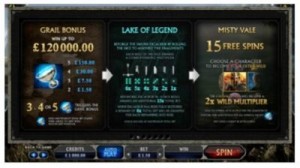 BONUS 3: Whispering Woods Bonus • This is a Pick Until Stop Bonus Game.

The aim of this Bonus Game is to pick the Shield with the highest multiplier.Players will pick 1 Shield from the 5 supplied.

The player may keep the selected Shield or pick again. The player will have two chances to change their mind. That is, players will have the choice of . . discarding up to two items, but must then keep the third item.

BONUS 3: Forest Falls Bonus • This is a Trailing Wild™ feature.

Meaning that any Base Game Wild symbol that lands on-screen on Row 1 or 2 of Reels 1 through . 5 holds in place and expands, sliding downwards. When the trail reaches the bottom of the screen . it holds for one spin and is then spun out on the following spin. 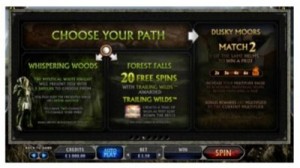 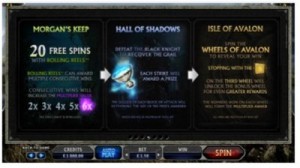 20 Free Spins award at a 2x multiplier with Rolling Reels™. Consecutive wins will increase the multiplier to up to 6x. Free spins may also not be re-triggered.

BONUS 6: Hall of Shadows Bonus • This is a Level Bonus Game.

Each move carried out by the player awards a prize. The success of each block or attack determines the size of the prize awarded.

In this Bonus feature, using a fight sequence, the player chooses the best combat moves to either block or attack the Black Knight from three possible directional options, in an effort to defeat the Black Knight and retrieve the Grail.

All winnings will multiply by the total bet.

BONUS 7: Isle of Avalon Bonus • This is a Wheel Bonus.

The Making of Avalon 2 – behind the scenes video

This video by Microgaming takes you behind the scenes and shows some of the work behind getting this great game out on the market. Interesting stuff!

Watch us play Avalon 2 and other slots live on stream through the following channels: