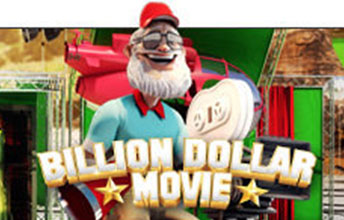 Billion Dollar Movie is a new slot from Betsoft, part of the growing 3D range.

Now these have been a bit hit and miss in the past, graphically brilliant but often lacking in playability. In this slot you take the role of the Director a certain Mr Goldberg… Betsoft have got the maths behind this much better than in previous games, although it is still possible for you to get five-of-a-kind with less than adequate rewards. I really hope Betsoft address that soon.

Something else they need to address is the lack of a real big payer – the top line on this is 5xGoldberg symbols which is only 1000 coins. The total average RTP (return to player) for this slot is a fairly average 94.81 – that’s low Microgaming territory and much lower than Net Ent releases – again Betsoft need to pay attention to players and up their RTPs by 2% or so.

In the Billion Dollar Movie slot, free spins game is triggered by 3 or more clapperboards anywhere on the reels. During the Free Spins game there are new symbols containing higher win amounts than during the standard game. A nice touch that really adds to the usual excitement of getting free spins. Unlike older Betsoft slots the free spins round seems to pay off nicely every time – I had 70 times my bet, 45 times bet and over 150 times bet in the three free spins rounds I got while writing this review.

You’ll get the following for the clapperboards:

The free spins can be retriggered with the same number of symbols and free spins as shown above.

I like this slot, it feels fairer than most Betsoft games and there is the feeling that you can land a big win. It also plays more smoothly – you’re not waiting around for graphics that add nothing to the game or poor bonus rounds as is so often the case with Betsoft. I’ll be playing this quite often I expect.

Hall of the Mountain King