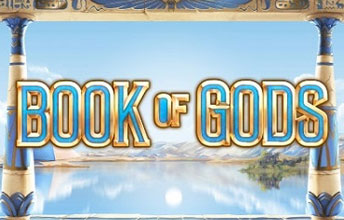 Book of Gods is one of Big Time Gaming’s homage to Book of Ra from Novomatic. That was the original slot with a Special Expanding Symbol during Free Spin. Whilst there are similarities, there are also additional features which makes this slot a heavenly treat. We are big fans of Book of Ra and the many copies and variations out there. We don’t know exactly what makes this so frequently copied. Maybe it is the expanding symbol potential which can really break the bank for you. Maybe it is the fact that Wilds are also the Scatters. We don’t know, but one of our biggest ever wins here on Slotmad twitch was when we hit over 5000x on Legacy of Ra MegaWays. Therefore, we love this mechanic.

In Book of Gods, there are four Gods, each with a different pay table, purple being the highest paying symbol followed by Red, Blue and Green. Besides the Gods, the game features the standard 9-A symbols and the Book of the Gods, which acts as both Wild and Scatters symbol. Collect three of it, and you’ll win 15 free spins, whilst four Books gets you 20 and if the Gods smile upon you and award you five Books, you’ll cash in a massive 25 free spins. 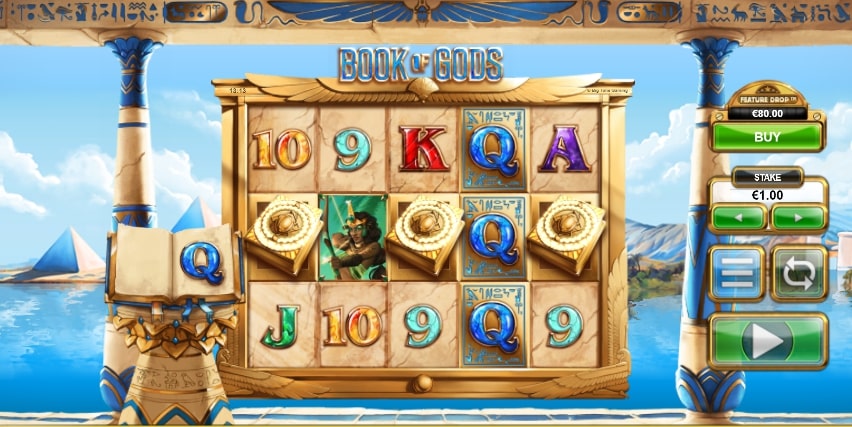 Book of Gods – The Base Game

On to the base game! Book of Gods’ 5×3 reel set creates 243 ways of winning, which really shows itself in the Free Spins Feature. However, even the base game can have you counting your blessings. During each and every spin, one of the standard 9-A symbols are chosen as a Special Expanding Symbol for that spin only. Should you hit three or more of the chosen symbol, the reels expand and you’re paid accordingly. One extra nifty feature is that the Book, the wild symbol, acts as a wild during the expansion sequence which can help create those coveted five-in-a-rows.

You can collect special Coin symbols during the base game. The Coin lower the cost of buying the Feature Drop directly, and is replaced on the reels by another symbol. Big Time Gaming offer this mechanic in many of their games and this one is not an exception. Starting at 80 times your bet, the Feature Drop can seem expensive to go for directly, but after playing for a while and collecting a few Coins you may find yourself buying those free spins at an affordable price.

Slots are all about the features, and in Book of Gods, they have put a new spin on a classic mechanic. The Free Spins feature starts when hitting three or more Books, and a Symbol is drawn. So far, it is pretty similar to the original, but that’s where the similarities end. First off, only the four Gods can be Special Symbols during the Free Spins. You are awarded one of them during the start of the free spins. If you manage to hit three or more books again, you’ll re-trigger another 15 free spins. You will also get an additional expanding God. Re/trigger three times and you’re laughing all the way to the bank. Each and every spin after that, each God will expand.

The Books will act as Wilds during the expanding phase in the Free Spins, similar to the functionality in the Base Game. A line of Five purple Gods pay a massive 20 times your bet. Therefore, a full screen of 243 ways will earn you a sweet 4860x bet! Of course, it is still lower than our record win of 5000x on Legacy of Ra for expanding J’s. That, and we all know spins with a full screen of the highest paying symbol are very rare. It does however show the potential, especially with the fact that Books count during the expansion phase. You can imagine three Gods and two wilds for 27 Five of a Kind and a 540x win. I can see that happening! 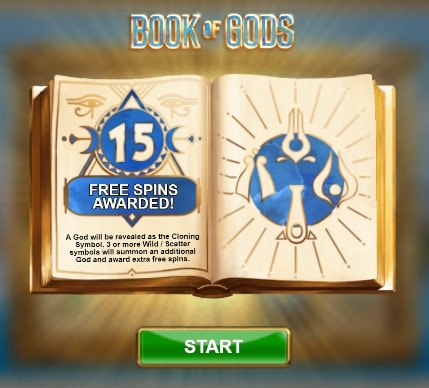 Book of Gods is a well made Slot, and it has similarities to the original Book of Ra. However, it does have enough differences to make it stand out from the other “Book of” games out there. Free Spins retrigger a fair amount, and you often find yourself winning rounds of 30 or even 45 free spins.

If you enjoy great banter and more wins give us a follow on our Twitch stream and if you want to leave a comment head over to our Forum and let us know what you think!

If this has got you interested in other feature buy games, you may like the following games:

Play Book of Gods at