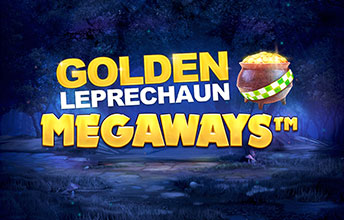 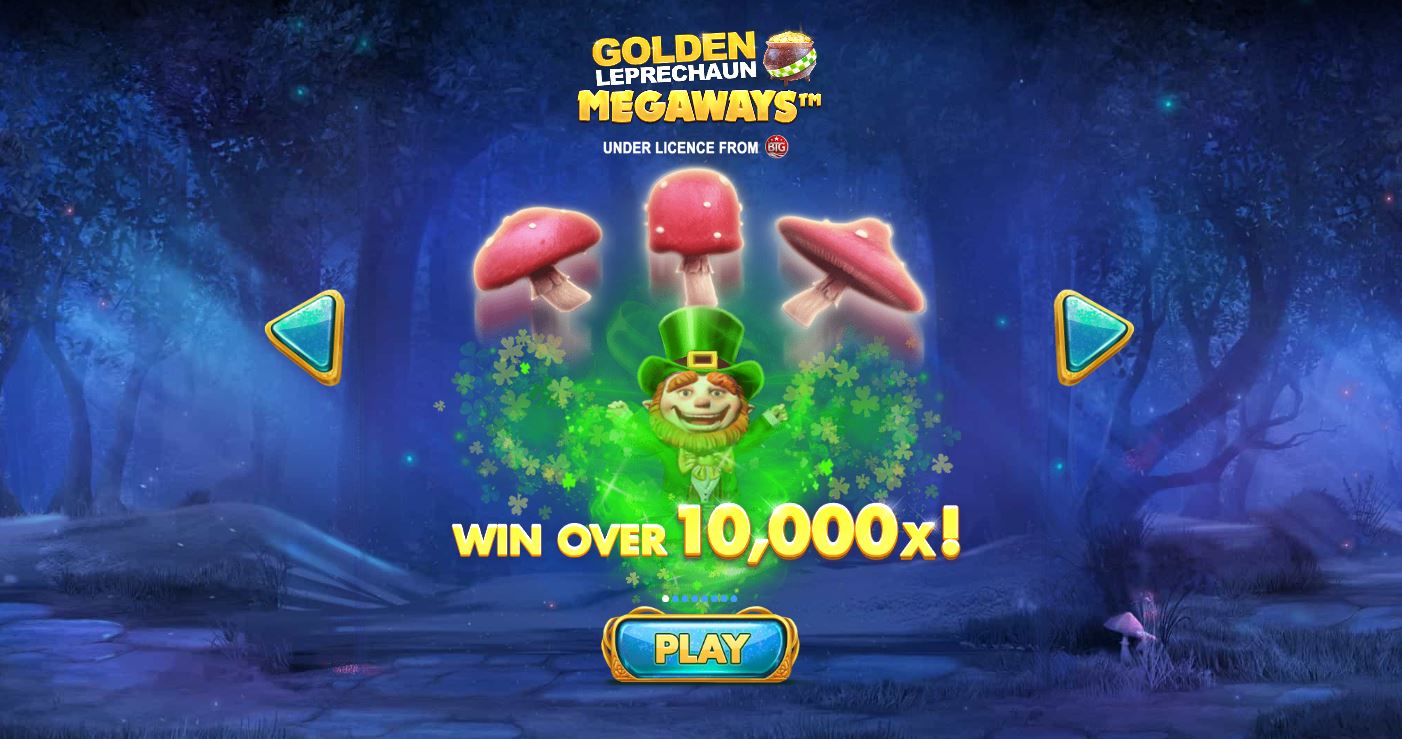 This online megaways slot offers the chance to win over 10 000 times you bet. It is no Dead or Alive 2 when it comes to volatility, but 10k x is still a high number.

In Golden Leprechaun Megaways, there are nine regular, paying symbols. The low paying are comprised of our trustworth Royals (No nine though). High paying consists of the “Number 1” medal, which is by far the most valuable. It is followed by the Four clover, the Book and a Pint of Guinness.

When Lucky ways strike, you will receive up to six of a kind of any symbol. This can happen at random on any spin, and the lucky ways symbol will change and reveal a paying symbol type at the end of the spin.

The free spins feature is called Lucky Spins and triggered by hitting three or more of the “Lucky Spins” symbol. When hit, three mushrooms presents themselves for you to choose. One random feature will trigger with a higher rate than normal during the Lucky Spins.

At random, the Golden Leprechaun Megaways slot can start throwing out Wilds. Up to five wild symbols will be placed anywhere on the reels.

Wild Stacks is the last random feature to occurs in the base game and the features. The stacks will get a random multiplier with up to 7x. This feature is available in other Megaways games such as Starquest and Queen of Riches Megaways.

Golden Lepreachaun Megaways uses the licensed format from Big Time Gaming. You will get a random amount of megaways each spin, as each reel will show between two and seven symbols. Wins are paid left to right as normal, and like many other Megaways slots, this one has Cascading Reels as well. This means that symbols forming part of winning combinations will disappear and be replaced from above with new symbols.

Base Game in Golden Leprechaun Megaways

The base game is pleasant to play in Golden Leprechaun Megaways. The joyful flute playing in the background makes the experience a soothing one, until of course that big win hits or you win the free spins feature and you start jumping up and down. 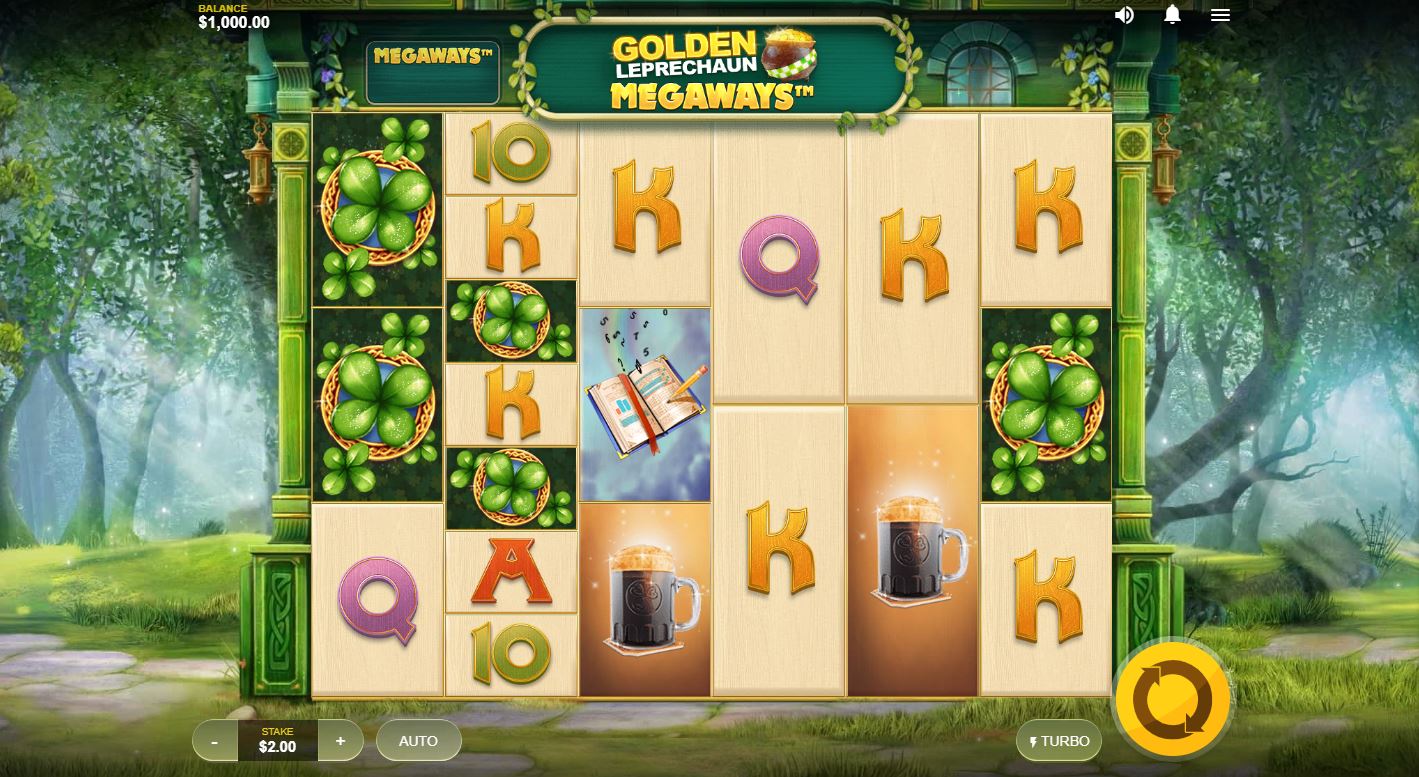 The Lucky Spins feature starts with the player choosing one of three mushrooms. This reveals a feature which will happen more often during the free spins. Each time a winning combination occers, the multiplier will increase for all future wins. Get a good run of wins early and you can look forward to a high multiplier at the end of the feature for some juicy wins.

The enhanced random feature together with the multiplier increase makes this game a Megaways which stands out from the crowd. 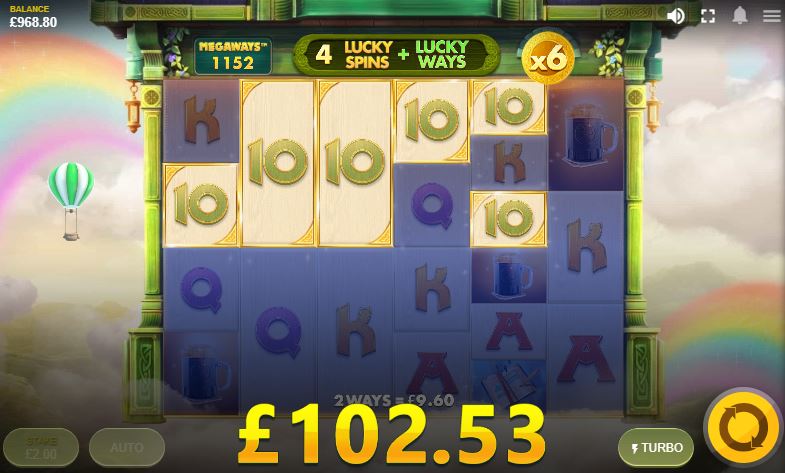 Our rating of Golden Leprechaun Megaways is 3.9 out of 5.0. It has a lot of features to keep the action and anticipation high when playing. Any spin can be a big win. We like that they have combined many features seen separately in other Megaways slots.  Red Tiger Gaming has done a good job with the original slot for Paddy Power, and the reskin for the rest of the Casino.

This is a great slot to have in any St Patrick’s Day promotion for the Casinos.

Review of Diamond Mine Megaways from Big Time Gaming