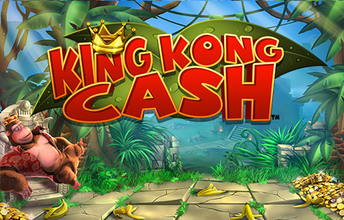 I’ve played loads of King Kong slots over the years. They’re not quite leprechauns or Egyptian Gods but they’re not rare.

To date I haven’t liked a single one of them. So it was with some trepidation that I sat down to a session on the Blueprint Gaming slot King Kong Cash.

It’s Blueprint so it looks great, they have that down to a fine art. 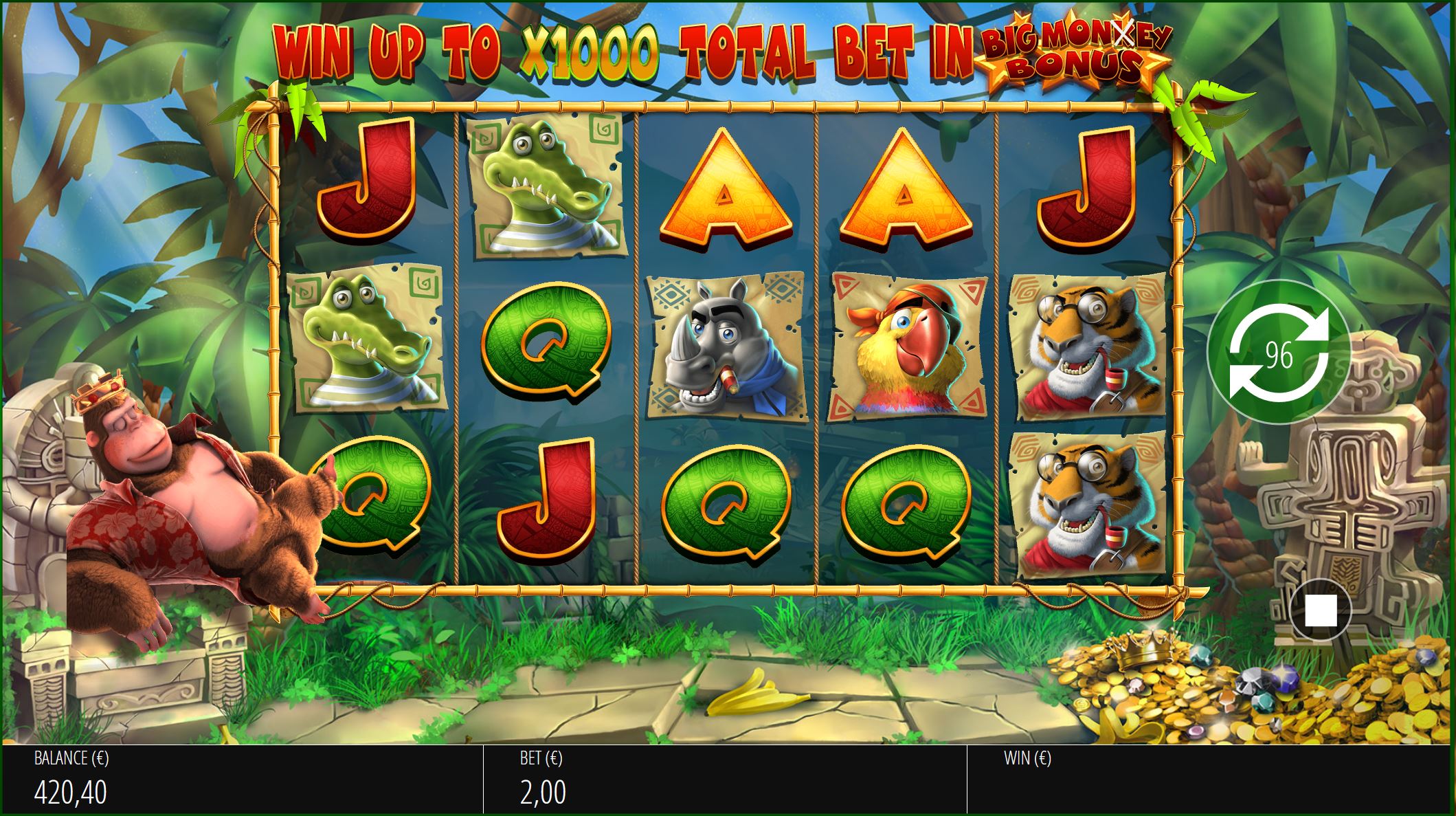 The sounds, the animations, the cartoon feel all work really well for the slot.

The sleeping King Kong is a nice touch although he is a bit of an insomniac. Worse still, at times he’ll wake up and do nothing at all. Lazy sod.

he does have his moments though, you really want to see him as much as possible despite the false alerts and when he starts throwing golden barrels around it can be a big payday.

King Kong features are as follows:

Whilst the reels spin Kong shall jump up from his throne with a banana cannon and fire a sticky banana bomb at the centre reel position, which then explodes turning additional positions wild. After any wins have been processed occasionally Kong shall jump up and smash the ground causing the reels to respin holding any wilds in position.

While the reels spin, Kong will awaken from his slumber and throw a Golden Barrel at the centre of the reels. This causes an explosion over the top of the reels which adds a number of Golden Barrels to the reels. Once the reels have landed all the golden barrels in view shall explode and reveal the same symbol.

Once the reels have stopped and presented a combination of winning symbols occasionally Kong can jump up from his throne and begin beating the reels with a wooden mallet. This will cause the reels to respin holding the trigger symbols in position. This will continue until the win is not improved.

It’s a Bluprint game so it comes with a few different bonus rounds.

Think Goonies or Beavis and Butthead and you’ve got the way this one works. 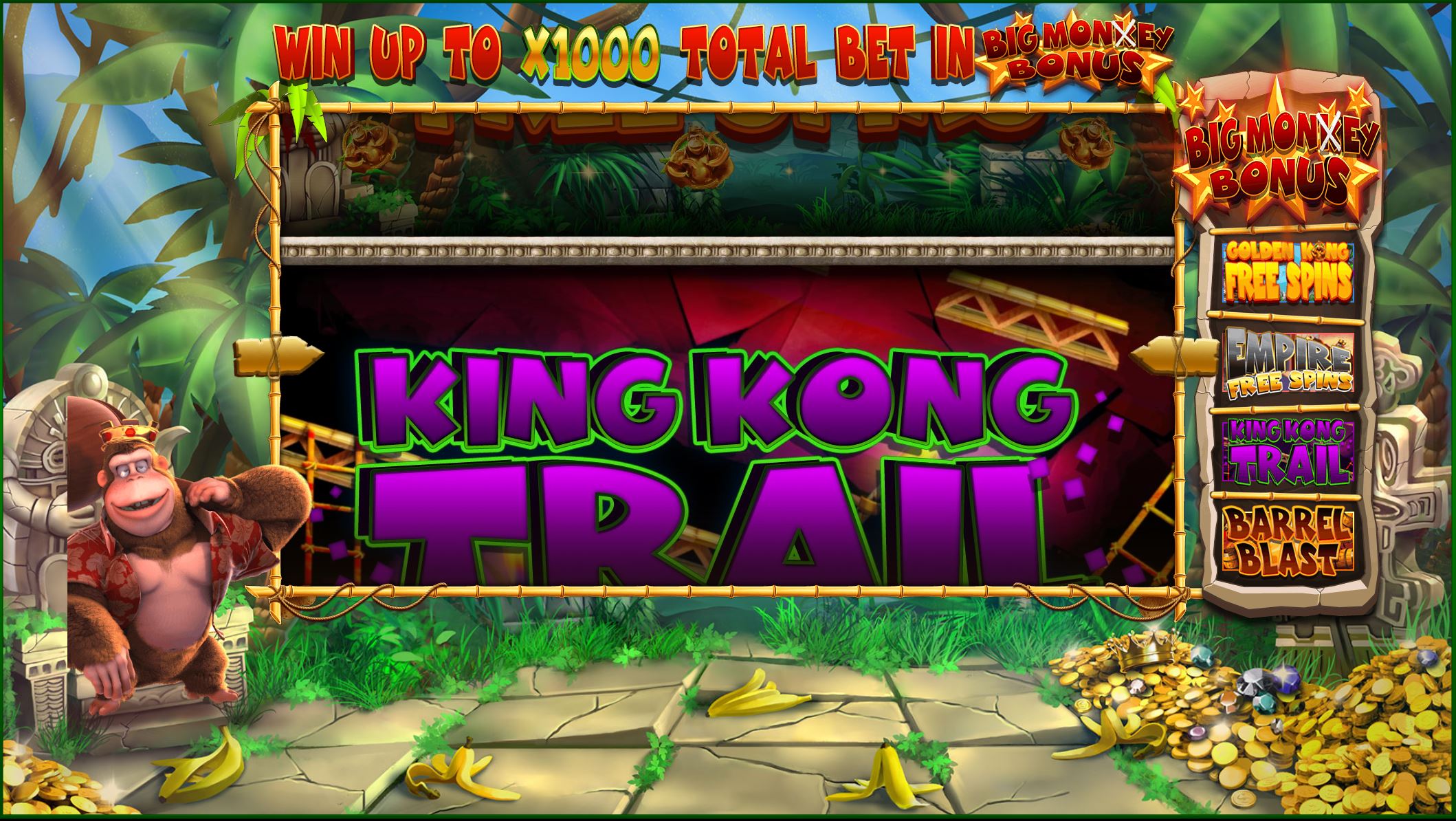 Triggered by landing on the Barrel Blast segment of the wheel during the King Kong Bonus.

After a short transition, a scene will be shown with a number of Barrels on screen along with a winplan to the left.

The player selects barrels to reveal an item. Each item will match up to a total bet multiplier, which is paid for matching 3 of the same item. Additionally, revealing a special icon will upgrade the total bet multipliers, and collecting 3 Golden Monkeys shall award the King Kong Cash BIG MON K EY Bonus.

After a short screen transition the player will be presented with a secondary bonus screen that is themed on the retro style platform game.

The bonus shall be split into two stages; Stage 1 is a multiplier trail up the levels to the King Kong Cash BIG MON K EY Bonus (stage 2).

The player always begins in stage 1 and is required to select barrels in order to advance along the trail increasing the total bet multiplier. Selecting the barrels will reveal one of the following positive or negative outcomes:-

If the King Kong Cash BIG MON K EY Bonus end game is reached, Kong enters the big money end game. Here the player is presented with Kong in the centre of the screen surrounded by a carousel of barrels along with bananas down the left and right sides of the screen.

The Barrels will spin and then come to a stop awarding the corresponding total bet multiplier. The player will then be prompted to pick a banana from either side of the carousel, revealing either a Golden Monkey (which respins the barrels and adds to the bonus win) or a Bomb which ends the feature, awarding the player the overall Total Bet Multiplier achieved.

Triggered by landing on the Empire Free Spins segment of the wheel during the King Kong Bonus.

A screen transition will occur and the player will be taken to a new destination, the top of the Empire State Building with multiple reels in view.

The screen will start at the top, before the screen pans down the other reel sets, which display the reels, and a side banner detailing the upgrade for that reel set.

The player is then presented with the bottom level. Here the player will play out their set of free spins on this reel set. The object of the Free Spins round is to collect Golden Monkeys which appear randomly on the reel symbols. By collecting a number of Golden Monkeys this then advances the player up to the next reel set. The further the player levels up, the more powerful the upgrade awarded.

As the player gets higher up, additional spins are awarded.

Free Spins continue until all spins are used where the player is awarded the amount displayed in Bonus Winnings. Additional free spins are awarded each time the player completes a level. 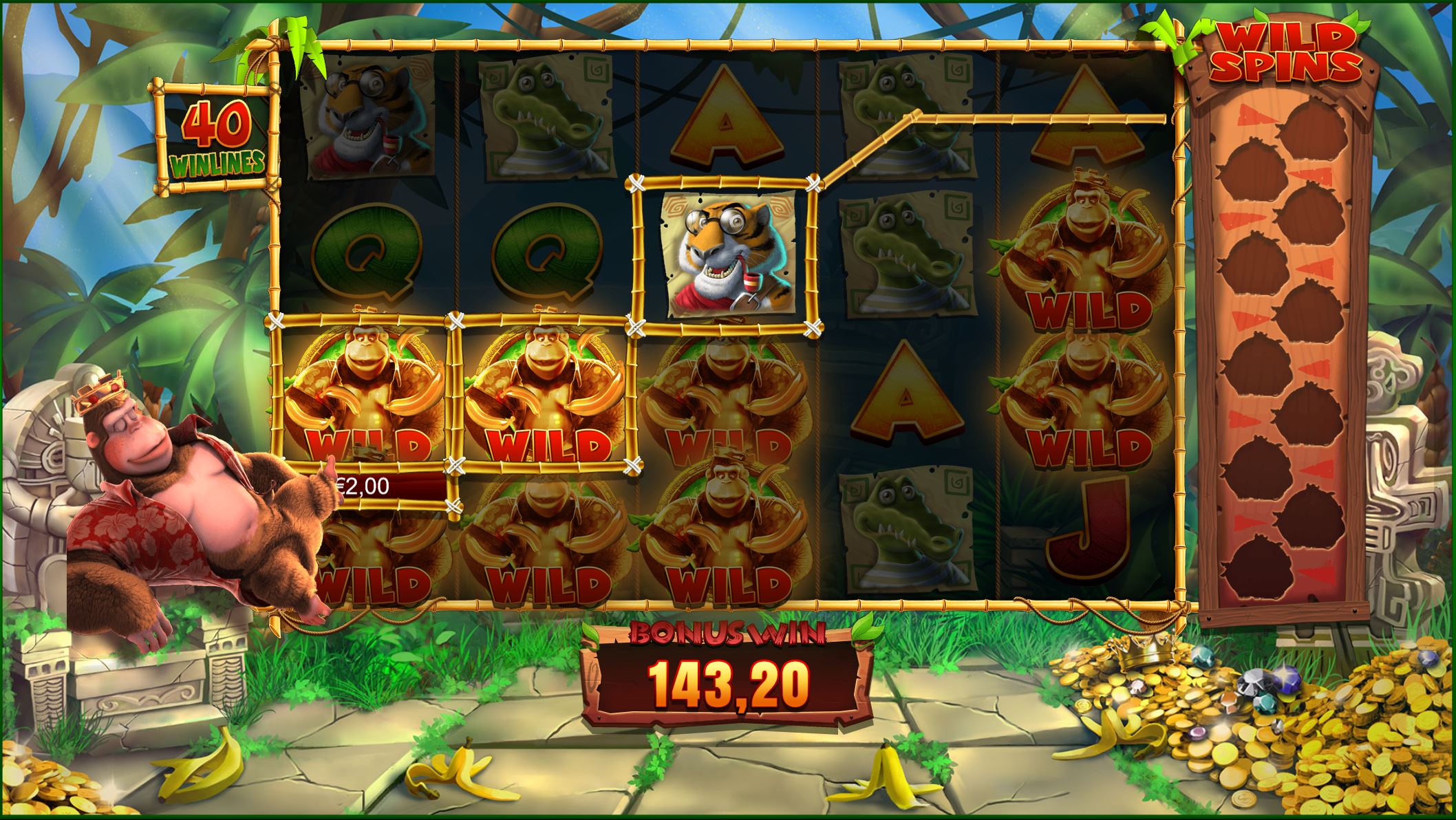 Triggered by landing on the Golden Kong Free Spins segment of the wheel during the King Kong Bonus.

Golden Kong Free Spins are played out on a 5×4 reel format with 40 win lines and a fixed amount of Free Spins. After each spin if any special wild symbols land in view a wild bank panel situated on the right-hand side of the screen will be incremented by the corresponding number of wilds. Once the initial round of Free Spins end the player will then be awarded a series of ‘Wild Spins’. Wild Spins play out on the same reel set and during each spin the accumulated number of wilds shall be placed randomly on to the reels. After a spin ends the player will be presented with 3 barrels over the top of the reels and prompted to select a barrel revealing either a Golden Donkey (Spins the reels again with the wilds shuffled to new positions) or a Bomb which ends the feature.

Whenever a Feature win is achieved in the game, the player has the option to either COLLECT the feature or Gamble to try and win one of the other features in the game (except for BIG MON K EY Bonus). 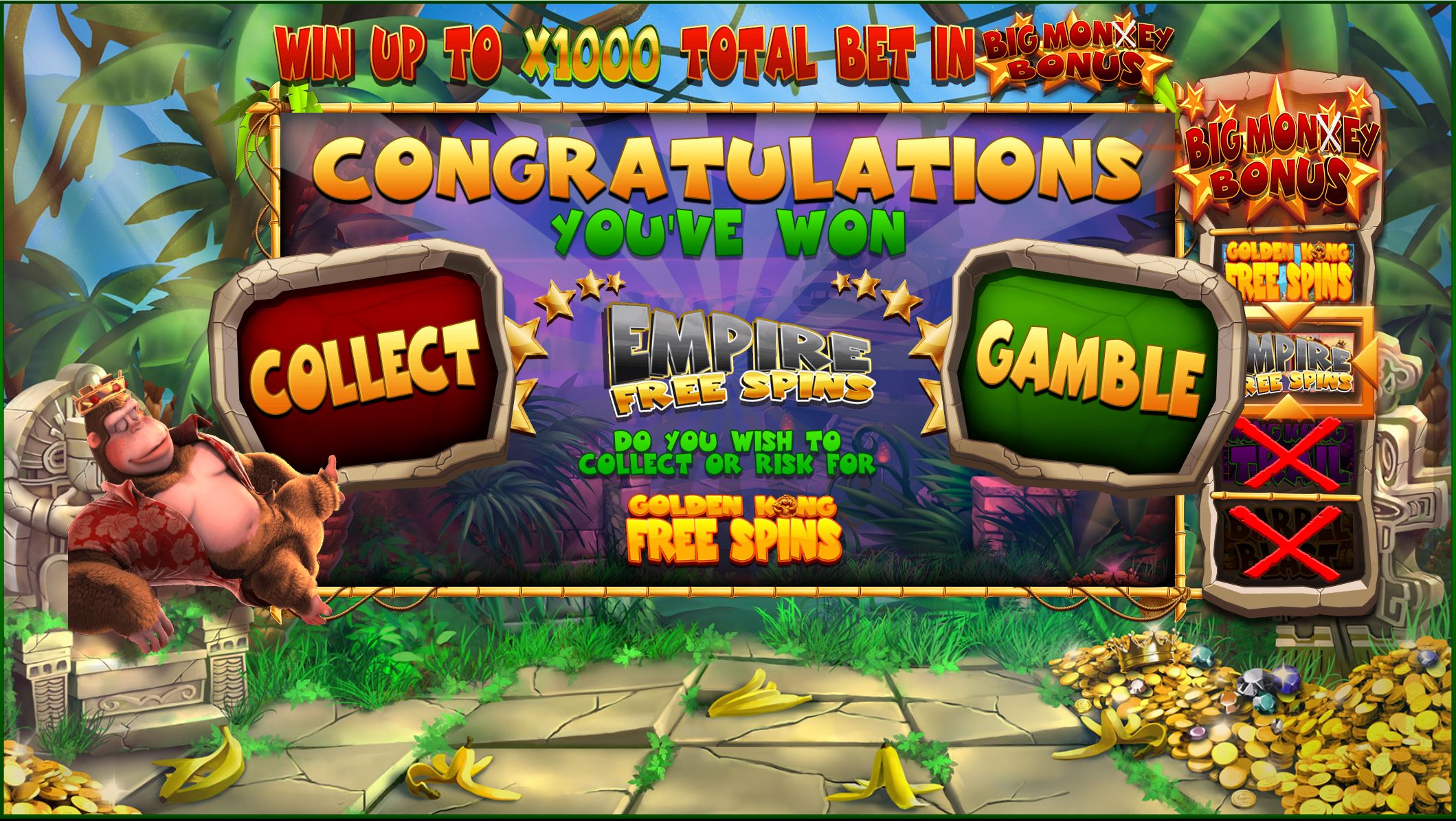 After the award of the initial Bonus from the wheel spin during the King Kong Bonus, the player will be presented with a Gamble screen showing the 5 features from bottom to top, ranked in terms of average payout. The feature the player has won will be shown to the player with the words COLLECT and GAMBLE shown on the feature panel in the centre of the screen.

If the player gambles and win, the feature they have gambled to can be collected, with all features below that now eliminated. This continues until the player collects, reached the top feature (where it awards that feature) or the player lands on the Mystery Win segment during the wheel spin where they are then awarded a Mystery Win Prize (a mystery cash value based on a multiplier of the player’s total bet).#

This is an incredibly fun game. if you like The Goonies then you’ll like this. Possibly even more so.

It all comes down to your aesthetic preferences. The game is absolutely solid and can throw out some really worthwhile wins. We play it a lot on our Casino Streams.

If you fancy joining in with us while we play slots and have a bit of banter we’d love to have you.

You can find out more via our: