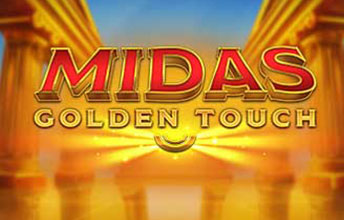 Midas Golden Touch is a new slot from Thunderkick. If you’re unfamiliar with the legend of King Midas here’s a quick summary.

A group King Midas’s mates were out and about one day when they came across a Satyr who’d been hitting the wine a bit too much and was in a bad way. They brought the Satyr to King Midas. Turns out the Satyr was King Midas old mentor and stepdad.

Midas looked after him and for ten days and nights, they enjoyed a feast (with lots more wine, probably not exactly what the Satyr needed to be fair). On the 11th night, King Midas was offered a wish.

He must have been drunk as a skunk too because he wished that everything he touched would turn to gold.
A short time later King Midas, of course, would come to regret his decision.
Surprisingly it took him quite a while. I think most of us would realise the error as soon as we went to the loo. Give it a shake and whoops, Gold member!
Fortunately, Dionysus (yes, that one, the god of wine, they’re all on the sauce in this story) took pity on Midas and reversed the spell.
And here we are – at least some good came of it because this slot’s a cracker.

The Midas Golden Touch Base Game

Midas Touch is a 5-reel 15 pay line game.
The base game is decent enough, you can pull some nice wins to keep the bankroll healthy while you’re waiting for that (elusive but worth waiting for) bonus.
The top win is a shade over 10,000x
You really want to see Wilds on your win line in this one as they offer a multiplier: 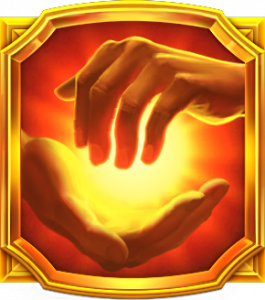 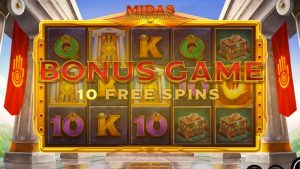 The bonus is triggered by three scatters (the doorways to King Midas Palace).
Once in the bonus game, any win triggers a sticky respin feature, locking in any winning symbols in the pay line. Get three scatter symbols and you are rewarded with a full-on retrigger and have 10 extra spins. Also, you get a random, single wild placed somewhere on one of the reels at the beginning of every spin.

Perseverance is the key here, hold out and get that bonus round. With the promise of King Midas’s gold, when you get in, it’s a game that is worth its weight.
We’ll definitely be back on this during the streams.
One that is highly recommended!

Watch us play Midas Golden Touch and other slots live on stream through the following channels:

Check out this 100+ times the money Big win we hit at CasinoEuro on Midas Golden Touch from Thunderkick.