The Mystery Spin Deluxe Megaways Online slot by Blueprint Gaming has a fruit machine inspired themed. It was launched in the summer of 2019, and is another in a long line of Megaways slots from Blueprint Gaming. The volatility is medium to high according to the provider, and is as such a bit lower volatility than your average Megaways game. 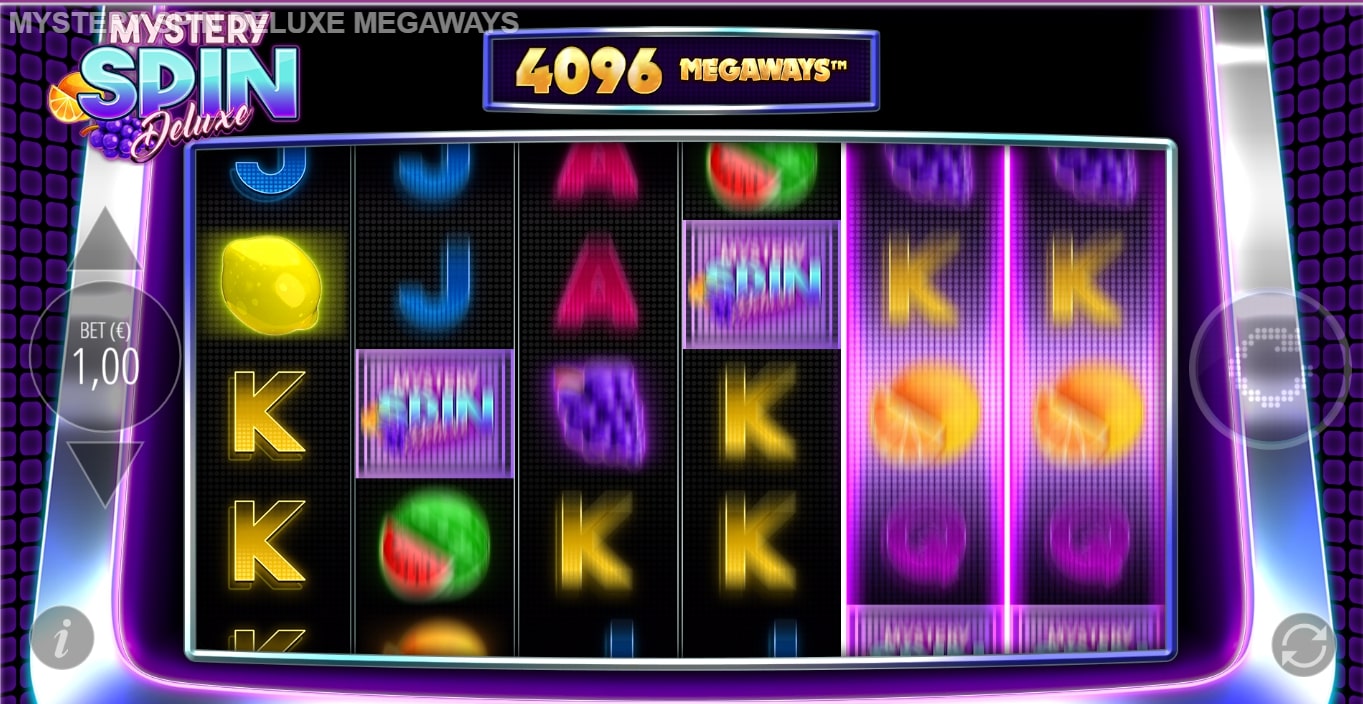 Mystery Spin Deluxe Megaways is a retro inspired slot with classic fruit machine symbols, where lucky number 7 gives you the highest payout. You need between 3 and 6 matching symbols on a payline in order to win, and here are the six in a row payouts: 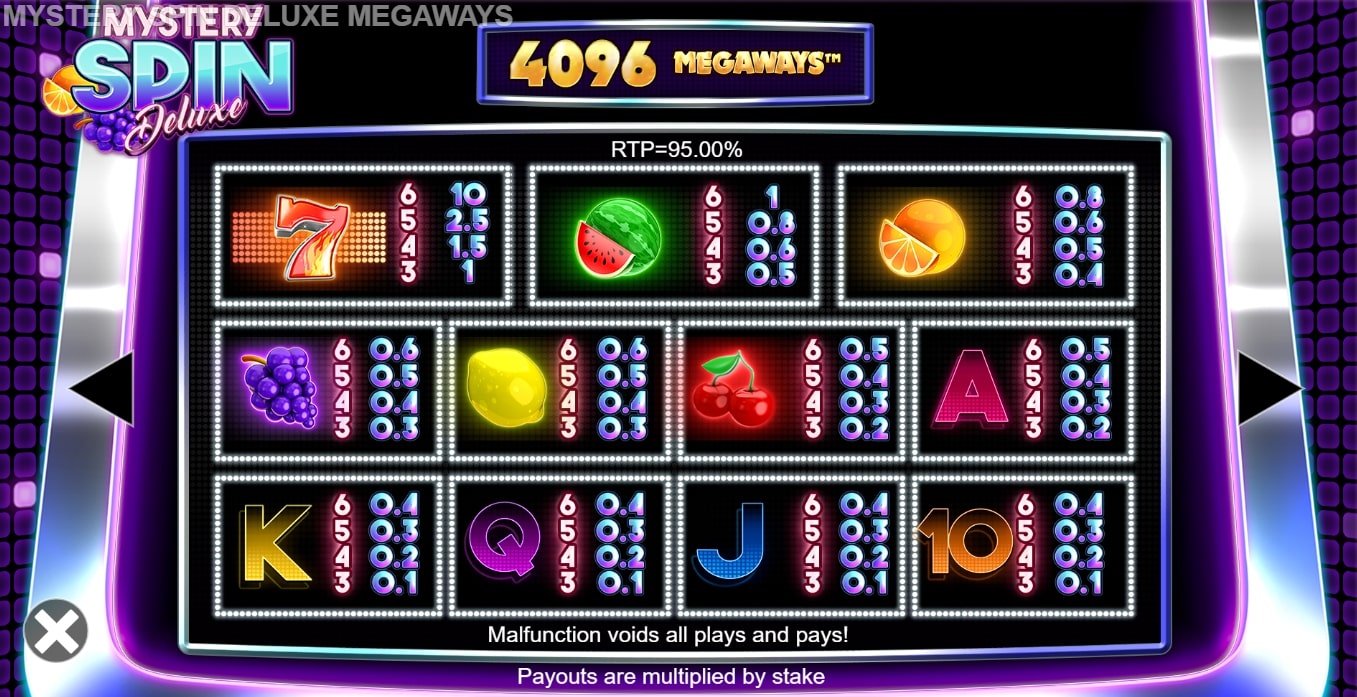 There are two special symbols in Mystery Spin Deluxe Megaways, namely the Mystery Symbol and the Wilds. The Mystery Symbols will, upon the end of the spin, randomly pick a symbol to which all mystery symbols then transform.

The Wilds substitute for all other symbols (no scatters, no caveat). 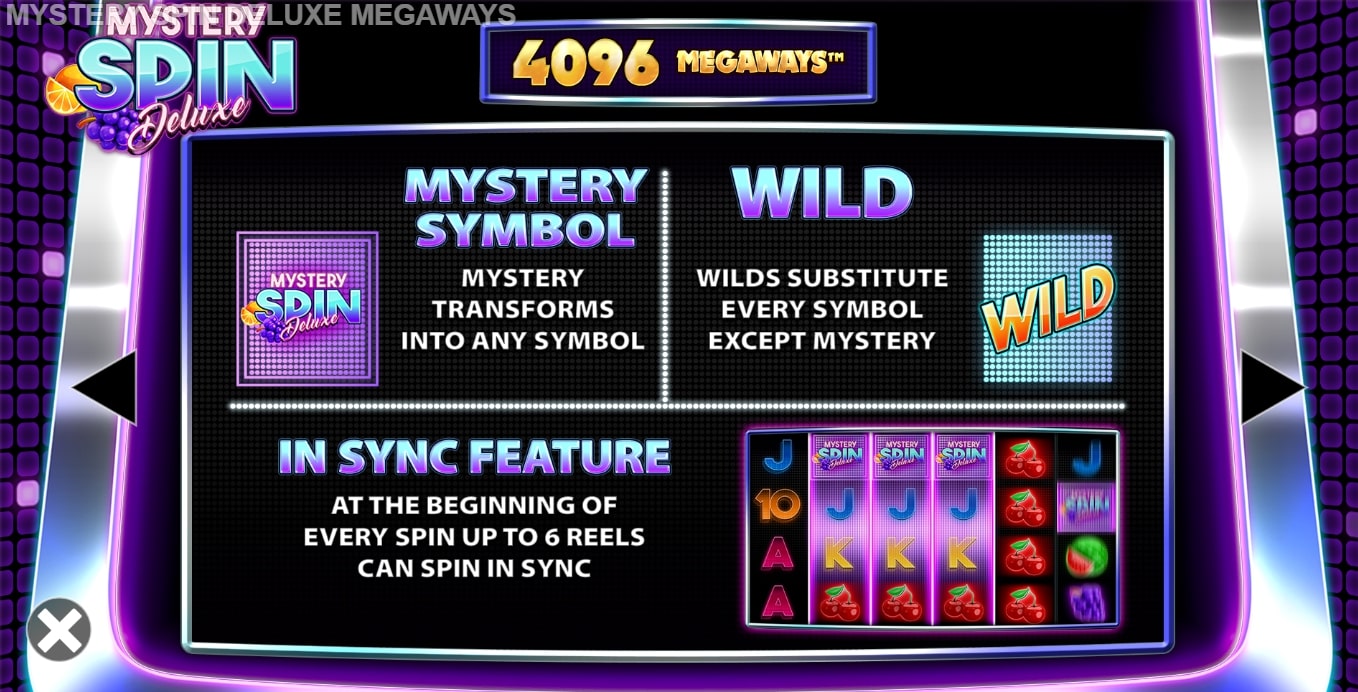 Mystery Spin Deluxe Megaways is a little bit different than other Megaways slots. First off, there is no Horizontal reel, like in Extra Chilli or Bonanza. Instead, the player is faced with six vertical reels. When these stop in a Spin, they will all show the same number of symbols, which can vary from three to seven symbols.

As such, the number of megaways are limited to six different set ups, namely 729, 4096, 15625, 46656 and 117649 ways. This combined with the lack of Cascading reels which are often present in Megaways games, makes us feel like this is an attempt to copy Twin Spin with the Megaways mechanic. Nice try by Blueprint, but it feel short in a few areas. 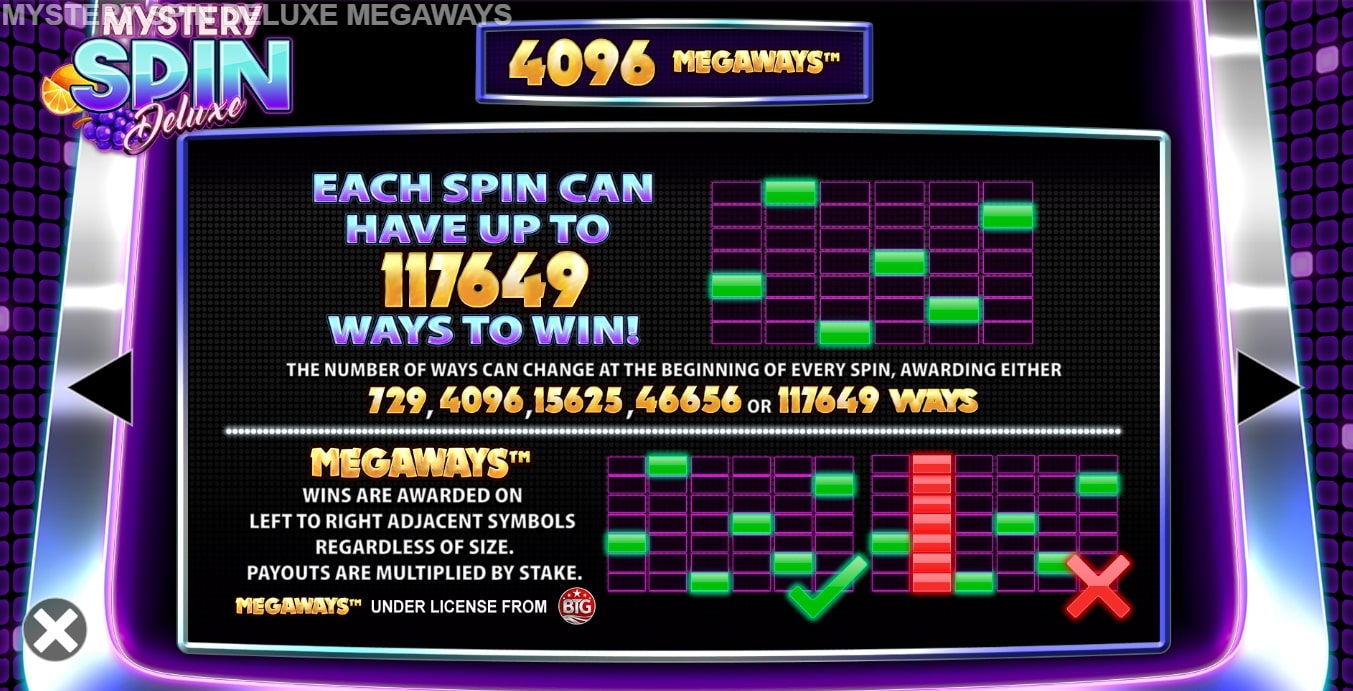 The Base game in Mystery Spin Deluxe Megaways is what it is all about. This game does not have a free spins feature to hope for, but rather every spin can be that BIG win. The slot features the In Sync Feature, where at the beginning of every spin a number of reels will link up and spin synchronized. Up to six reels can be linked together, and this is where the big win can happen. Six linked reels, all showing seven symbols upon stopping. Ding Ding Ding. You’re minted. 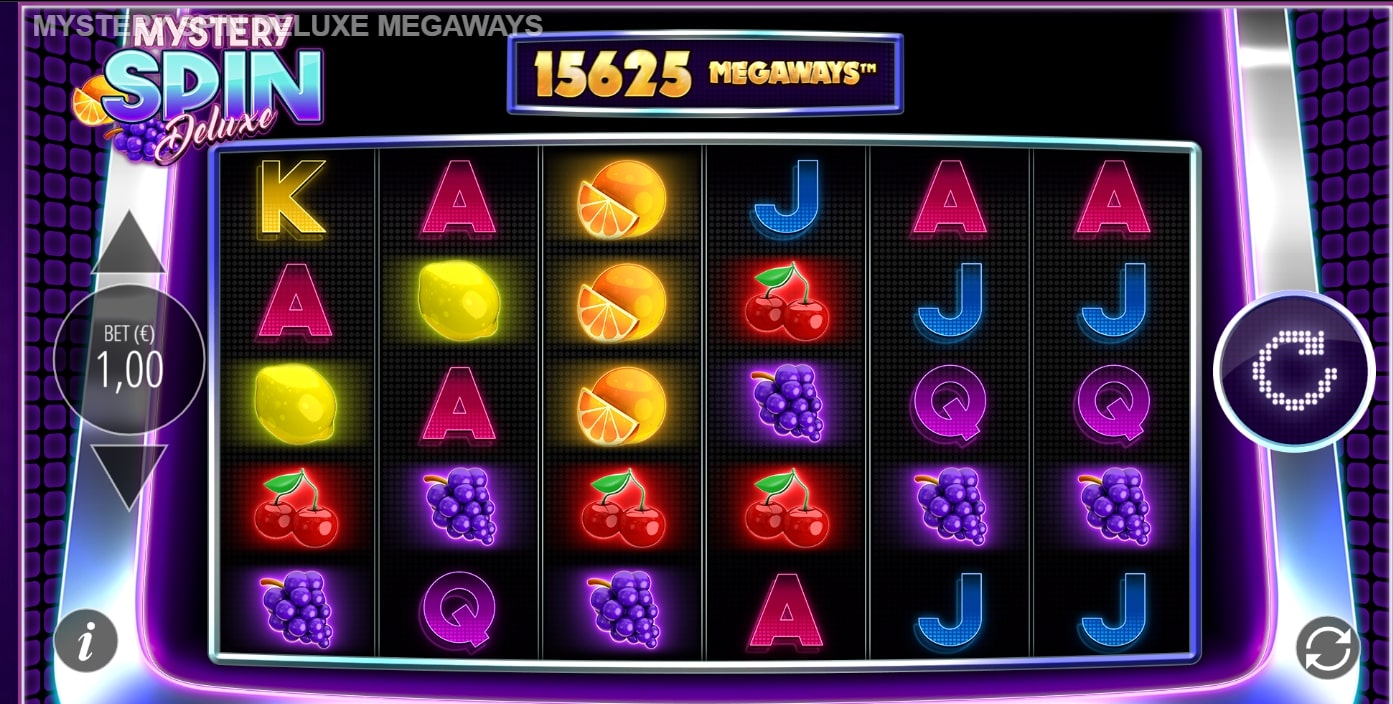 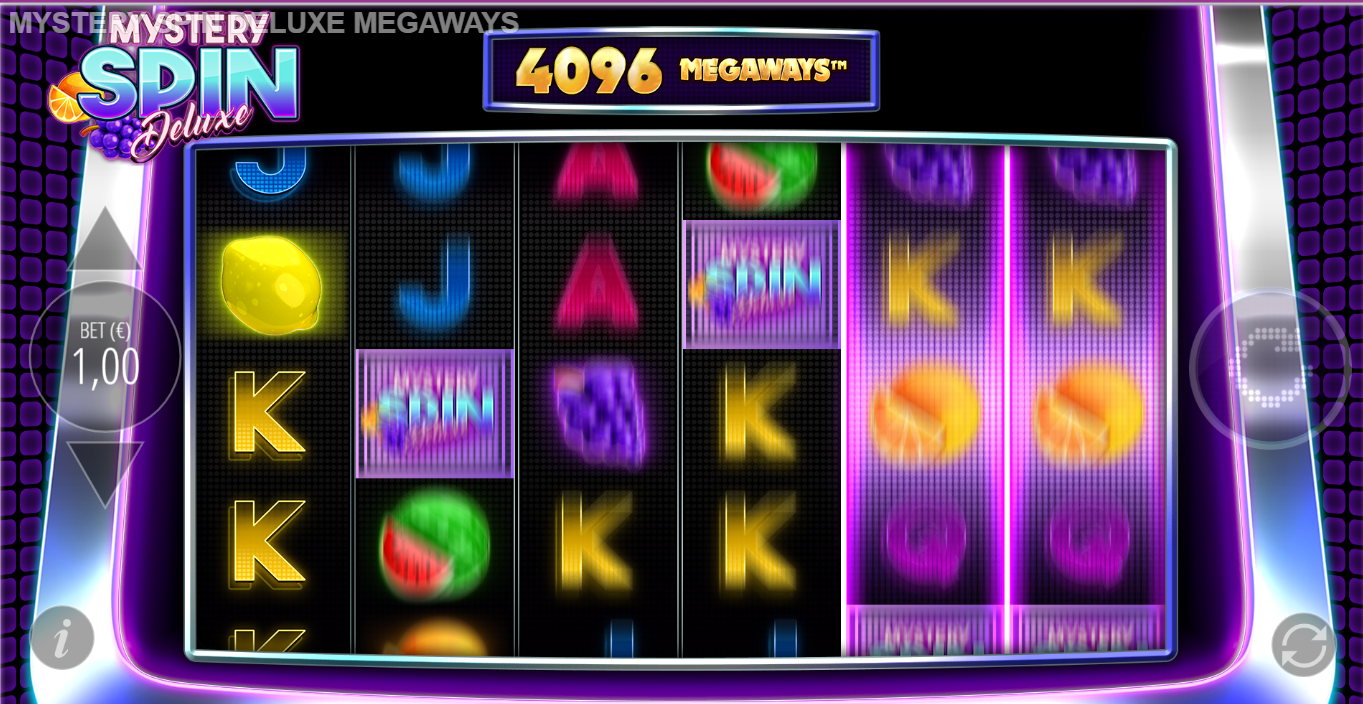 Our conclusion of Mystery Spin Deluxe Megaways is an ok 3.2 out of 5 stars. The slot has a lot of potential and as always, the graphics and sounds are expertly finished by the Blueprint team. However, the game falls short in a few areas. First off, the RTP is a low 95%, so right off the bat you know you will get less back in the long run.

Secondly, the way the Megaways work in Mystery Spin Deluxe Megaways is to lock in a certain number of symbols which will show on each reel. All reels are predetermined to have the same number of symbols, unlike many other Megaways games. Instead of a vast array of different number of ways, this leaves the player with only 729, 4096, 15625, 46656 and 117649 ways to win. Sure, it is great when all of your reels lock up in the “in sync” feature and you land seven symbols on each, but otherwise it doesn’t lend itself well to the Megaways concept this “Twin Spin”-mechanic.