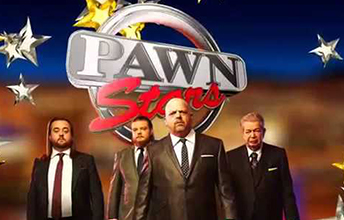 Since this review was posted back in the day when The Old Man was not only still around but as sprightly as, well, as Big Hoss things have changed a bit.

It looks very very dated now and given the way the show has developed you can’t help thinking a Pawn Stars 2 might be a good shout.

Yes, the Pawn Stars gang are here to make our online slots playing days a bit brighter with a touch of vegas glamours, and Chumlee! The game looks great.

All pays except scatter pays are adjacent on an active payline. All pays except scatter pays are left to right on an active payline starting with the left most reel. Scatter pays are on or within one position of the center payline. Only highest win paid per line played. Only highest scatter win paid per play. Paytable is dynamic and reflects actual payouts based on current wager. Wins on different lines are added together and scattered wins (if available) are added to pay line wins. All pays in currency. You cannot change the number of paylines. Malfunction voids all plays and pays. One or more Wild Symbols in a winning combination on an active payline is wild and substitutes for all symbols except Free Games and Pawn Bonus symbols.

Watch us play Pawn Stars and other slots live on stream through the following channels: