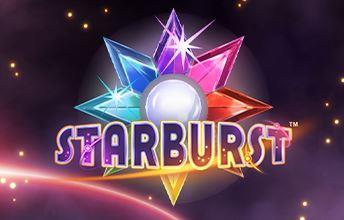 This latest slot from Net Entertainment is a real retro affair. If you spent the 80s stuck in a dark arcade trying to beat the last level boss in Galaxians or frantically trying to eat ghosts before your pacman turns yellow again,  then this is going to ring a few bells with you. If you’re too young to have done that then you’ll also like this because for some unfathomable reason the 80s are cool again! Starburst’s designers have captured the feel of an old arcade game perfectly and the colours and sounds are fabulous. 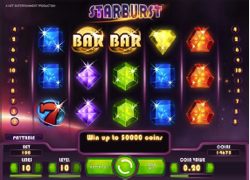 It’s a real departure for NetEnt who have recently been cramming incredible amounts of innovation and features into their games (without actually ruining the Gameplay, are you watching Betsoft?). This game is much simpler than their usual fare and dispenses with a bonus game completely as well as having no scatters or extended free spins features. The odd thing is it doesn’t matter. Perhaps we’ve been going a bit too far and what Starburst brings is a return to quick fire, quick pay slots that are just exciting from start to finish. 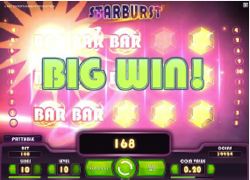 As with all of Net Entertainment’s slot releases this has a really nice Return To Player payout percentage and the variance is set quite low on this one to keep you spinning. When you do land a Big Win you’ll know about it! The screen is a blaze of colour and will light up the room. The maximum win is €2500 per bet line.

Watch us play this and other slots live on stream through the following channels: