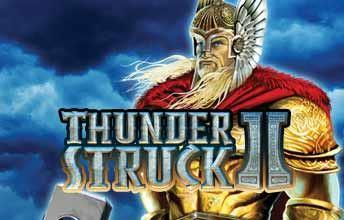 Not exactly a Loki release (sorry!) so is the hype well placed with Thunderstruck II? The most hyped slot release of all time and it’s completely, well, average. I never particularly loved the original Thunderstruck slot. All the elements are there. Norse mythology, Thor, Odin, some busty bird in skimpy outfit, I think her name’s Val.

Over to the Game Play

The Bonus Game isn’t bad, get three Thor’s Hammers and enter the Great Hall of Free Spins. Get 20 bonuses and you’ll turn the Great Hall GOLD and you’re in for big wins.

Now, this is where there’s money to be made.

1: Find a casino with a high bonus – don’t worry about the wagering requirement you’ll meet it.

2: Play on Thunderstruck 2 for a medium stake – perhaps €1 a spin

You’re basically spending the casino’s bonus money to get you as high up the Thunderstruck 2 Gold ladder as much as possible.

3: When (or rather if) the bonus money runs out, see where you are on the ladder – remember you need 20 wins.

4: deposit your own money and make it to the Gold stage

You’ll need to be really unlucky not to make your money back when you hit the Gold stage so this is a great way to play a slot.

Sounds good so why don’t I love it?

Simple – 243 reels/win. I find it hard to love these, I like 9-line slots, I love 20-line slot, but 243-line slots are just a bit weird. They can be very lucrative when you’re in luck, but when your luck’s not in they can eat through your cash like Oprah Winfrey after a few beers.

Welll those are my thoughts…

The best place to play it is definitely All Slots Casino – the best bonuses at the moment and you can try it for free! You also get a weekly 10% cashback!

Here’s what the makers have to say about it:

Thunderstruck II is based on an innovative 5 reel, 243 ways to win concept. It hosts a range of benefits that include, Wilds and Expanding Wilds, Scatter action, four different Free Spins Bonuses, Multipliers ranging from 2x to 6x, and absorbing free games.

The real road to riches begins in the Great Hall of Spins where the chambers of the four great gods, Valkyrie, Loki, Odin, and Thor, can be unlocked, one by one when three or more of Thor’s hammer symbols land anywhere on the reels.

The action doesn’t stop there either; Microgaming has embedded a completely unique feature for online slots into the gameplay in the form of a player achievements structure, which has the capacity to remember returning players’ past wins, allowing for the cumulative pursuit of rewards. The achievements based concept empowers players to achieve “gold status”, by winning the range of payouts of each symbol. This is reflected in the paytable; as players unlock each symbol their paytables will begin to turn gold, keeping track of winnings and striving for a full Gold paytable. The grand achievement is the unlocking of all the God’s Features and reaching the 20th trigger of the bonus, where players will obtain Gold Status in the Great Hall of Spins.

After playing for a number of weeks now I have to say: I was wrong. I love this slot now. I play it more than any of my other favourites and I can’t understand why I didn’t get instantly hooked. Well, it takes a man to admit he was wrong and I was.

Can’t stop I’m off to The Hall of Spins (Oh here’s a tip. When you progress through the hall of spins stick with the Valkyries bonus most of the time – the Loki one, in particular, is best avoided)

Want to join me in The Great Hall – Join All Slots Casino – I promise you won’t regret it!

Watch us play this and other slots live on stream through the following channels:

Have we peaked you interest in more reviews? Check out the following reviews: